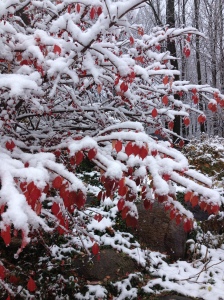 And yes, Jane and Garry are putting together another unique retreat on January 24th! Everyone who wants to understand more about wild foods and what’s available in winter should come, this will be a very special day. Garry Tibbo will walk you through the forest showing what is good to eat now, in winter time and why.

Jane, on the other hand, will demonstrate how simple movements from ancient Yoga and breath exercises from Siberia affect the work of your cardiovascular system proving it to you with the measurements of your blood pressure and heart rate before and after. Also, you will be lead through Jane’s famous Forgiveness Meditation where your subconscious brings to the surface everything that you were holding for decades. Watch your aura’s radius going beyond the levels you have ever been before since your aura will be entrained by Jane’s. Feel the difference between the talk and the real practice seeing real results!

We will serve you hot vegan lunch before the forest walk and hot soup right after the walk. Jane is so excited to work on the menu and Garry is going to bake bread out of the bark.

Improvement of condition of cardiovascular and psychological systems during retreat

hours. The only quick measurement of this could be the radius of the aura, since it depends on the emotional, cardio, mental and psychological health. The participants were measured upon arrival, after special Yoga session that was designed based on the blockages in the meridians averaged to the number of the participants. The third point of measuring was completed after consumption of the raw food prepared mostly from the local plants, nuts and sprouts and after the walk in the forest.

As it is easily seen on the chart there is the significant difference between the radius when we started and when we measured the third time.

Also need to mention that one of the layers in the auric field is electromagnetic radiation which is captured by Kirlian photography. The major organ that produces electromagnetic field in the human body is heart therefore auric field detects the condition of cardiovascular system as well along with psychological health, spiritual development and amount of energy.

*Most of the blockages were in the Heart, Lung, Spleen and Gallbladder meridians.